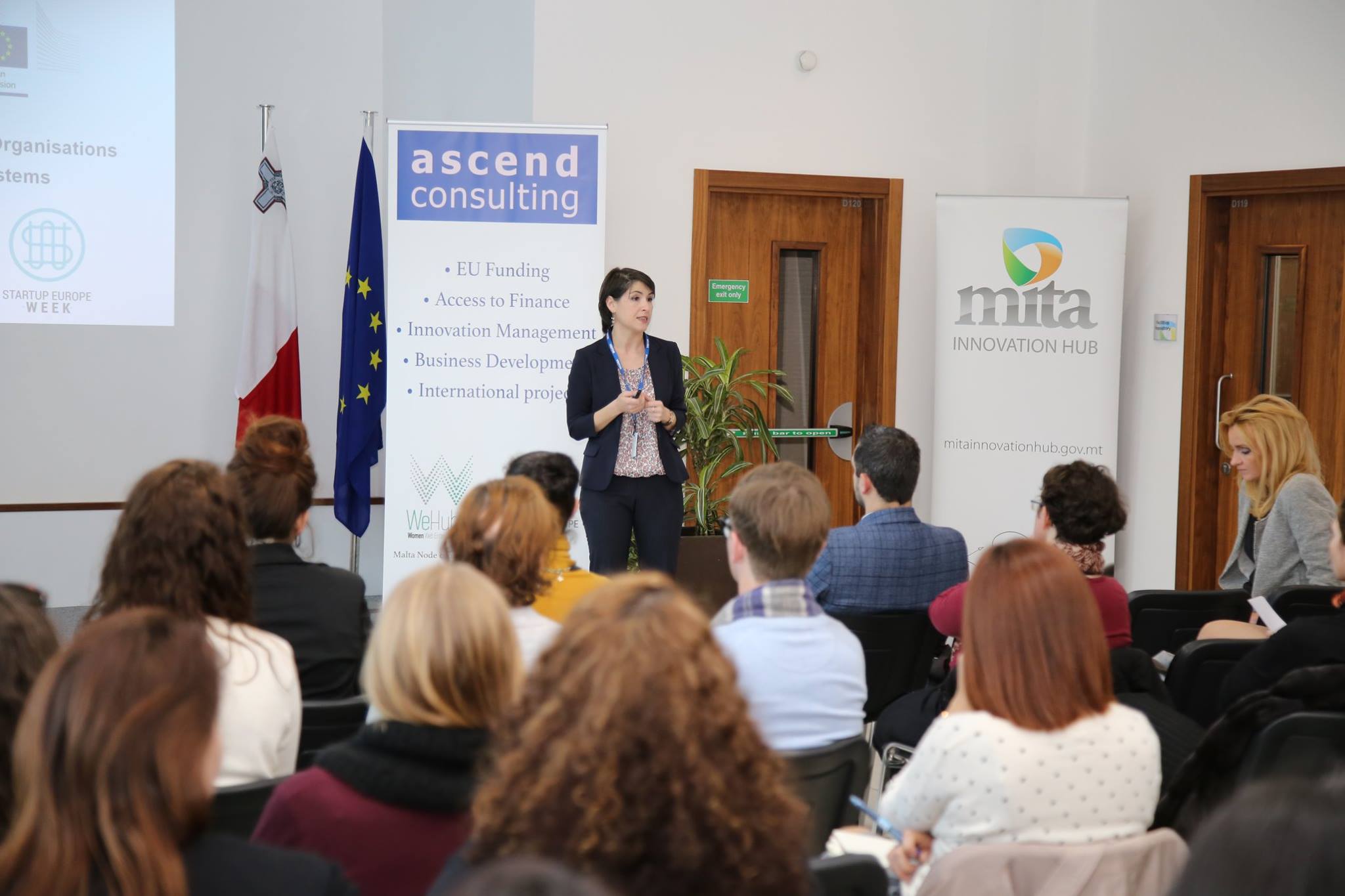 Malta was no exception. Ascend Consulting, in collaboration with the MITA Innovation Hub and the Malta Communications Authority, organised their own SEW2017 event focused on fostering women web-entrepreneurship.

During the last 15 years or so, Information and Communications Technologies (ICT) have permeated and connected our entire lives, communities and economies. Although the world-wide-web, digital media and social networks, the cloud, and their various applications in eCommerce, eLearning, eHealth, eMoney, etc. have helped create a more level playing field across the board, women still play too small a role in the entrepreneurial world, and even more in the digital economy.

Whilst women are 52% of the total EU population, they represent only 30% of self-employed or new business founders. The situation is even more unbalanced in the field of digital businesses, with women representing only 19% of web entrepreneurs in Europe. Reaping the benefits of the US Women’s Business Act 1988 that put in place long-term infrastructure to support women’s enterprise development, today the USA can boast an average of 33% of female participation in web-entrepreneurship. Based on its Innovation Hub experience in supporting startups, MITA estimates that Malta’s situation in this sense sits around 5% or even less. This appears to echo what a soon to be released international documentary “She Started It” reveals: women create only 3% of tech startups, receive less than 10% of venture capital financing and run only 4% of Fortune 500 companies.

A WeHubs survey carried out in 2015 highlighted that 51% of women web entrepreneurs experienced gender biased treatment at least once in the work environment, often from other men entrepreneurs, advisors, bank representatives, clients and even other women. 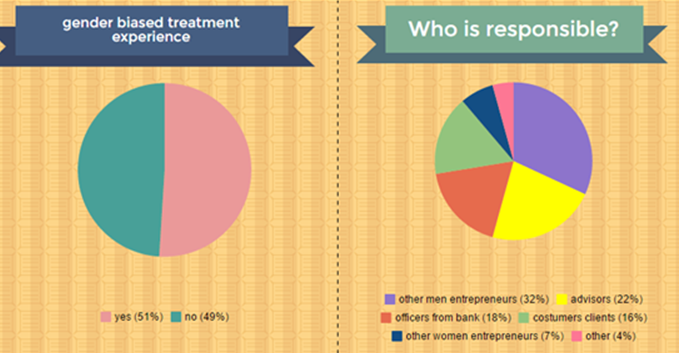 As possible measures to improve the situation, the surveyed women web-entrepreneurs identified free mentorship (46%), female advisors (43%), female entrepreneurs as partners (41%), and family friendly arrangements. 76% of those surveyed also believe that support initiatives and services dedicated to women only, would be beneficial. Such preference is backed by UK National Council of Graduate Enterprise (NCGE) findings reporting that 98% of women chose to participate in their Women’s Flying Start Programme because it was women-only. The number of women accessing the NCGE’s Flying Start programme increased by 800% when a women-only option was introduced.

Against this background, the aim of our SEW2017 event last Thursday was to bring around the table all Maltese stakeholders interested in or already involved in the promotion, facilitation, support or actual implementation of women web-entrepreneurship, so as to better understand the current situation in Malta, the main challenges and issues being faced, to raise awareness of any existing forms of support, and identify some key measures and next steps ahead necessary for furthering women web-entrepreneurship. 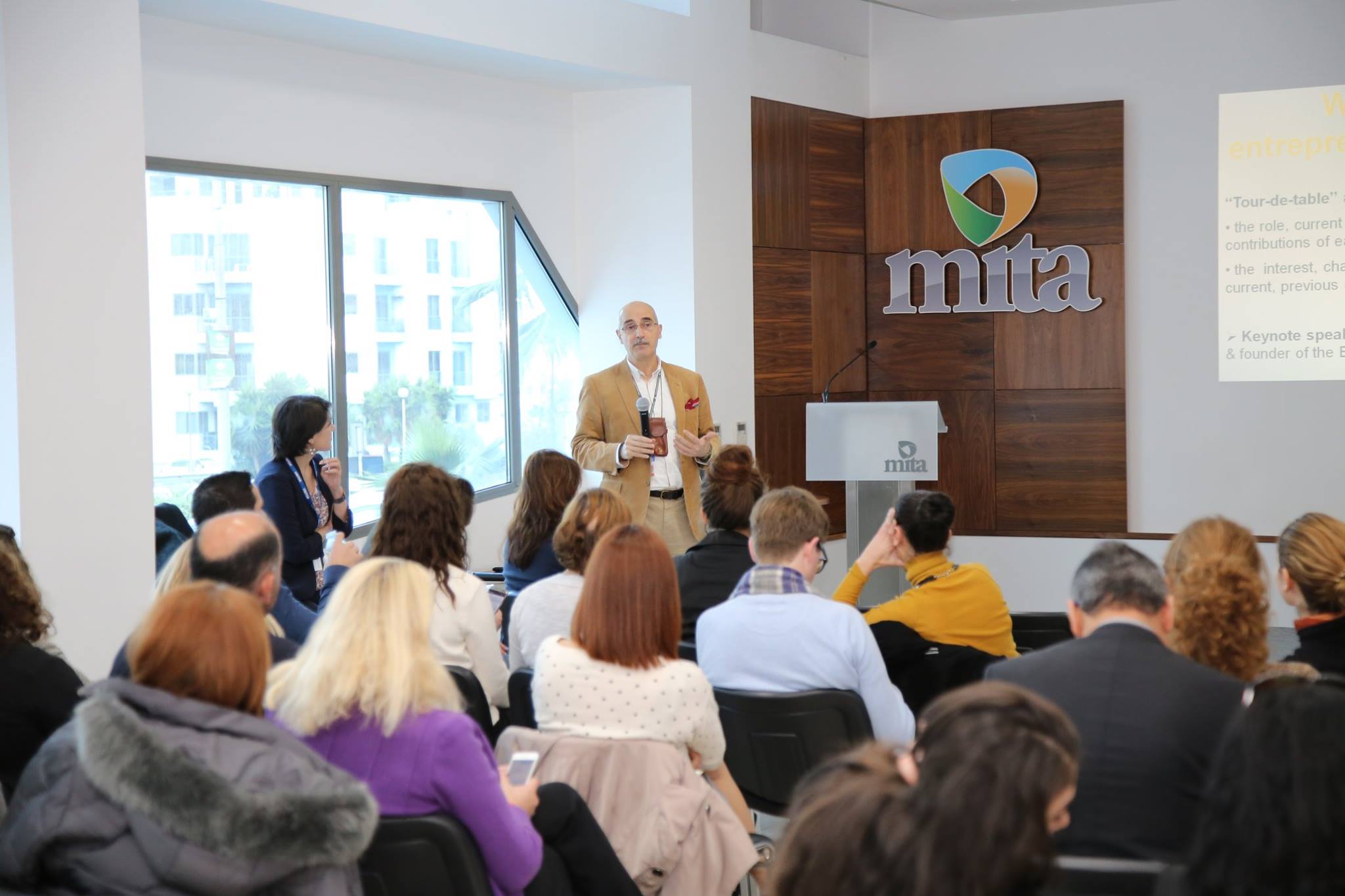 We were first and foremost thrilled by the keen interest being shown in the event that was attended by some 50 participants, ranging from representatives of the organisers, the Foundation for Women Entrepreneurs, Business & Professional Women Malta, Malta Business Bureau, University of Malta, ZAAR crowdfunding platform, Microsoft Innovation Centre, Malta Enterprise, Miss InTech, Women Directors Malta, Junior Achievement Young Enterprise, Polaris Ventures, to various current and aspiring women web-entrepreneurs, as well as Julie Meyer, the CEO of Ariadne Capital and the founder of the EntrepreneurCountry Global. 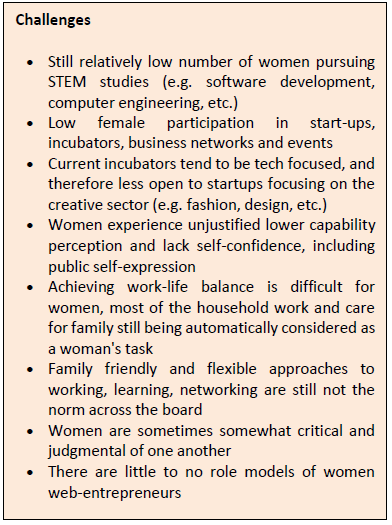 Some of the main challenges faced, and possible solutions that emerged are highlighted aside and below.

In line with the results of the above mentioned European studies, the discussions concluded that positive discrimination through dedicated support, incentives or quotas are needed to counterbalance the current situation and existing bias, kickstart the cultural change and help break the glass ceiling for women.

Our plan is to further translate these outcomes into an Action Manifesto to serve as a basis for the development of future projects and initiatives in this sense.

As a first step, we will be creating a Facebook and LinkedIn group in which all persons and organisations interested in the topic can get involved.

To join this community of interest and bring your contribution to fostering women web-entrepreneurship in Malta, please email Anamaria Magri Pantea on anamaria@ascendconsulting.eu or Alex Borg on alexander.borg@gov.mt. 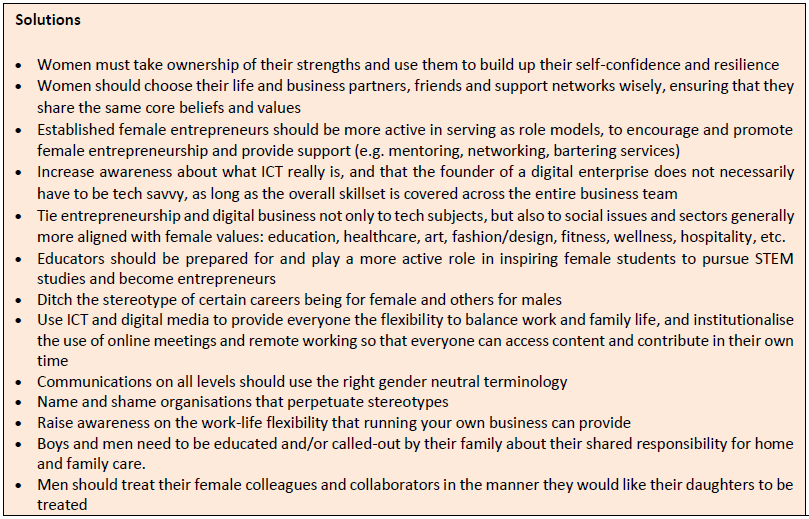